Is a -12% down a Verdict on Fed and Government Actions? Give It Time. 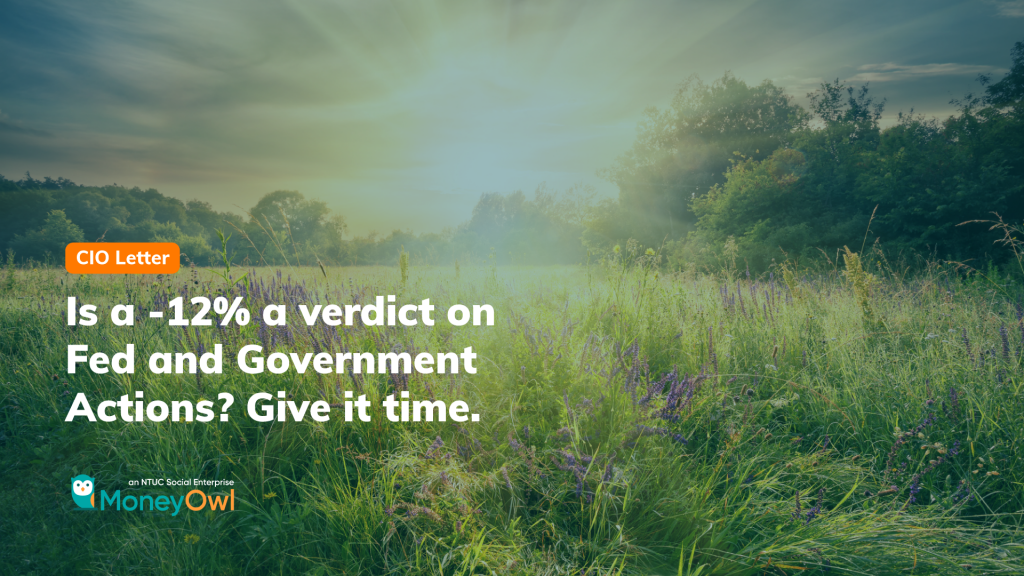 When the markets are under extreme stress, things can and do happen on Sunday nights.

Back in September 2008, Lehman’s default and Merrill Lynch’s running into Bank of America’s arms for rescue took place on a Sunday night, US time.

A week later, Goldman Sachs and Morgan Stanley were named bank holding companies, allowing them access to the Federal Reserve’s liquidity window, basically providing them a lifeline as well as a vote of confidence so they don’t go the way of the other investment banks that don’t take retail deposits. Did it work? Yes, because Goldman Sachs and Morgan Stanley are still with us today.

But at that time in September 2008, did investors believe in the Fed action?

I remember attending a quarterly meeting client with a corporate entity that Monday morning, just a few hours later. As the global bank credit analyst of my fund management firm then, I was asked: now that Morgan Stanley had access to this liquidity, would they avoid defaulting on the Morgan Stanley bonds that we had bought for them in their portfolio? In the background, stock futures continued to tank, corporate bond prices were plummeting because there were no buyers. I do not remember the exact answer I gave them, but it definitely was not an unqualified yes. There were more rescues to come in the following months, by both the Treasury and the Fed. The US stock market did not bottom out until 9 March 2009, but recover it did. You would have reaped the recovery and return, if you had given it time.

The Federal Reserve took action to cut rates from 1.00% to 0% and announced $700b of Quantitative Easing. Would it work?

If you looked at the immediate market action, including the -12% plunge in the S&P500 last night, the answer at this point of time would seem to be an emphatic NO – reminiscent of that Monday just after the announcement on the Morgan Stanley and Goldman in September 2008 when I faced my client. Like then, everyone is saying that what is needed is fiscal action from the Treasury, or now, for a health crisis solution. But perhaps, it does not mean that what the Fed had done has no meaning for markets or that it was wasted. Neither does it mean that further action – fiscal, monetary or otherwise – is not coming.

Remember that the Fed’s top priority is to keep the banking and financial system and its plumbing working well. It is also not true that the Fed has used up its bullets just because rates are at zero.

In 2008, there was a whole host of other “alphabet soup” initiatives that the Fed rolled out. As if to demonstrate its prowess, on Monday night, the Fed announced yet another $500b in unscheduled overnight repo to flood the bond markets with more liquidity. The yield curve is once again upwards sloping. The Fed theoretically has no limit to expanding its balance sheet and has significant authority over its banks. Some people criticise the Fed because it can’t solve a health crisis – it’s not it’s job – but surely ensuring a functioning financial system is a necessary if insufficient safeguard.

So, does it mean that we will have more downside to go in the markets? Over the weekend, I have been asked this so many times, with varying sentiments that there are X more months to go to the bottom, or maybe one has missed the boat (because it’s going up from here) and what’s the direction?

My answer is that it depends on your time frame.

Anything within the next month, year or two, I would admit openly to you that my colleagues at MoneyOwl and I have absolutely no superior skill beyond a pure guess, period. At the time of writing, 17/3 morning in Singapore, stock futures and Australia markets are higher and the financial news is wondering whether this is the beginning of the reset after the catharsis.

Anyone who claims to be able to call the direction, the path or the bottom or the period to the bottom is saying he is smarter, faster and better than the rest. And maybe he is, but remember that on average, most fund managers get it wrong across all time frames. And there is really no point to this when markets are swinging at the rate of 10% one way one day, and 10% the other way the next. Even if he is right that there is more downside to go, there is no way he can tell when you should go all in. So, I do not want to guess and then search for a preponderance of clever-sounding macro theory to justify it. And do you really want to anchor your goals and hard-earned money on my cleverness and my guess, or anyone else’s?

But if you ask me where the market would be 10 years out, which is really the minimum timeframe for anyone in 100% equities, I can tell you with a high degree of confidence that your nest egg will be better off than it looks on paper today. This is data-evidenced: the stock market always recovers and go up over the long term.

We are almost -30% from highs in a bear market. That is a very rare event. The COVID-19 virus is very challenging economically, some Governments will do better than others, some countries will take longer than others. But none of this changes the fundamentals of the economic or financial system, which is why the stock market always goes up in the long term. Anchor your goals on that.

It is solely on this basis, and not on a market outlook or timing, why we ask some of our clients who already have their core plan sorted out, to consider putting excess funds or dry powder to use, in small portions or tranches at various levels. But if you do not intend to keep your dry powder invested into the long term, please do not buy more; because you are just market timing and this can end in grief and jeopardise your goals. Instead, stay invested according to your comprehensive plan (do one with MoneyOwl if you haven’t done one – there is no better time), be patient and disciplined, keep investing regularly according to your plan on the way down, in portions, and wait for the upturn that will inevitably come.

Yes, COVID-19 will probably have a long tail of economic effects and it will change the way we live and work permanently. It will wipe out some companies or business models, but many will survive and new ones will emerge and thrive. Consumers, industry and markets will adapt. As it has through world wars, genocides, depressions, oil crises, terrorism, banking crises and yes, epidemics, so the human spirit will rise to the occasion, once again, as before, and with it, the markets.

So, keep well and enjoy the enforced downtime and ignore the markets. Focus on what matters in your real life, stay employed in your day job as much as it depends on you, tighten your belt and stay invested. Give the market time to do whatever it will and work itself out. It always does, over time.

Disclaimer: While every reasonable care is taken to ensure the accuracy of the information provided, no responsibility can be accepted for any loss or inconvenience caused by any error or omission. The ideas, suggestions, general principles, examples and other information presented here are for reference and educational purposes only and are not meant to be a substitute for professional investment advice. The information and opinions expressed herein are made in good faith and are based on sources believed to be reliable but no representation or warranty, express or implied, is made as to their accuracy, completeness or correctness. Expressions of opinions or estimates should neither be relied upon nor used in any way as an indication of the future performance of any financial products, as prices of assets and currencies may go down as well as up and past performance should not be taken as an indication of future performance.

The author and publisher shall have no liability for any loss or expense whatsoever relating to investment decisions made by the reader. This article should not be construed as an offer or solicitation for the subscription, purchase or sale of any fund.